Pressure measurement in this sensor is based on strain gauge technology. There are a total of four resistors that are arranged on a diaphragm to form a Wheatstone bridge.

The change in resistance due to deformation of the diaphragm as a result of pressure is measured to determine the pressure.

In thin-film sensors, the membrane is both the separator and the membrane and there is no need for internal transmission fluid.

This technology is provided only to measure the relative pressure because the creation of a vacuum behind the membrane requires a wide effort in terms of construction.

The advantage of the thin- film is its excellent ability to be resistant to high peak pressures and bursting pressures. Also, extremely high pressures can be measured even when there are high shock and vibration loads. 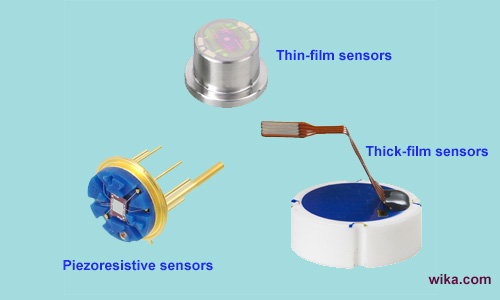 This sensor also utilizes strain gauge concepts, and uses a ceramic base. Thick-film sensors, like thin-film sensors, are also based on the Wheatstone bridge principle.

Here, the resistors are applied to a ceramic sensor body. The change in resistance due to deformation of the diaphragm as a result of pressure is measured to determine the pressure.

When producing this type of sensor, the resistors are printed on the body of the sensor and baked at a high temperature. Resistors and other circuits are set on a membrane using a thick film process.

Thick film sensors provide long-term stability and good corrosion resistance. Since ceramics cannot be welded to the process connection, it is necessary for using media separation.

Piezoresistive sensors have a more complex structure in contrast to the previously mentioned sensors. Piezoresistive pressure sensors use the change in electrical resistance of a strain gauge connected to the semiconductor measuring diaphragm in which piezo-resistive resistors are placed and are exposed to the pressure medium.

By changing the shape of the diaphragm, created by compression or expansion due to the applied pressure, the pressure measurement is taken by the piezoresistive effect.

The material used in most sensors of this type is silicon. This type of measurement technology is most often suitable for use in high dynamic pressures.