Photoelectric sensors also named photo eyes sensors are devices that use optical properties to detect the distance, presence, or absence of an object, changes in the surface conditions, and position of objects. The sensor consists of an optical transmitter (often infrared) and a photoelectric receiver. The basis of the work of these sensors is based on the change in the amount of light received.

These types of sensors are other types of proximity sensors that operate on the basis of sending and receiving infrared waves.

These non-contacting sensors send modulated infrared waves and receive the reflection of these waves from different surfaces.

The use of pulse-modulated light increases the detection range of the sensor and also reduces the effect of ambient light on the sensor.

These sensors detect the light of any object, regardless of its type, and convert this light into electrical signals. It measures the physical quantity of light and then converts it into a readable form for the system.

An emitter is used for emitting light and a receiver for receiving light.

When the light beams emitted and sent by the sensor body are cut off or reflected, it changes the amount of light that reaches the receiver, then the receiver recognizes this change and confirms that it is from the emitter, and therefore triggers an output and converts it into an electrical output.

The output of a photoelectric sensor can have three type after activation, which are PNP, NPN or relays.

The ambient air in which the sensor is installed (especially industrial environments) may contain dust, smoke, and moisture. In this case, the sensor needs to send a stronger light. 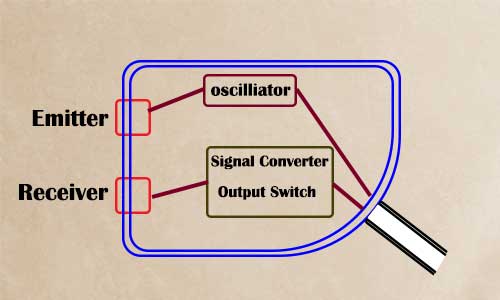 In this method, the photo sensor has two parts, a transmitter and a receiver, which are placed facing each other.

This type of sensor has the longest switching distance among all types of optical sensors. They have a longer detection range than other types of photoelectric sensors.

This is because the light only has to move in one direction to reach the receiver from the emitter. 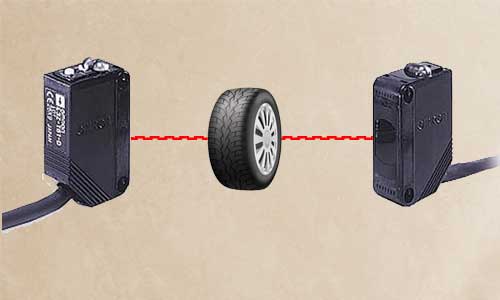 Applications of this type of sensor include:

But this sensor also has disadvantages compared to the other two types.

It costs a bit more, requires more space for proper installation, because they have 2 components that require 2 cables and 2 pins, and therefore take up more space. and does not recognize thin transparent objects as well as the diffuse reflective model because light can reach the receiver directly through the object.

In this case, there is only the receiver and the transmitter, which are both mounted on one side, and the object acts as a reflector, thus light is sent by the transmitter.

If the object is in front of this light, reflections of it are emitted in space. Some of these reflections reach the receiver and the state of the output changes.

The switching distance of this sensor depends on the amount of reflected light. 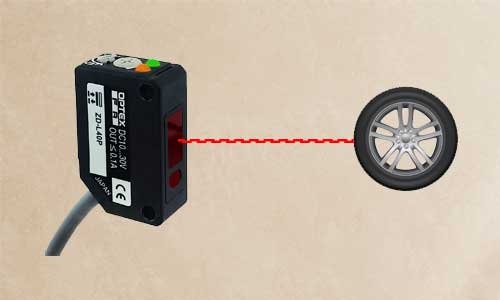 In this method, the sensor has a light reflector and the transmitter and receiver are on one side and the reflector is in front of it.

This reflector receives the light sent from the transmitter and reflects it to the receiver. If there is an object, the light does not reach the receiver and the sensor detects the presence of the object, and its output changes.

The switching distance of this sensor is higher than the Diffuse sensors but lower than through-beam sensors because the light must first hit a reflector and then return to the receiver. These types of sensors are the most widely used in factory automation. 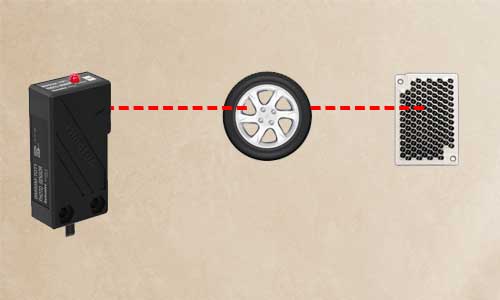 Disadvantages of these sensors are:

In different photoelectric sensors, and depending on their type, the light wave is generated in two ways:

In this method, which is used by most photoelectric sensors, light is produced in specific time intervals and in the form of pulses.

In this way, the effect and interference of lights from other external sources are eliminated and there is no disturbance in the operation of the sensor.

In this method, which is mainly used by mark photoelectric sensors, light is sent at a constant density and continuously from the sensor.

The response time of these types of sensors is very short, but in contrast, their sensing distance is limited and they malfunction due to the effect of external lights.

Photoelectric sensors can be used in a wide range of different industries.

Want to know more about Photoelectric sensors? Click on the below link:

Top Photoelectric Sensors Suppliers and Manufacturers in the Middle East