A laser sensor is a type of non-contact sensor defined as an electrical measurement device used to sense small objects and the exact location of the target objects. This sensor uses a laser to produce light in a straight line.

Laser light contains light waves of similar wavelengths. For this reason, the beam moves in a parallel direction.

This light can be used to transmit information over long distances. Laser sensors are considered as photoelectric sensors, but they use a laser light beam to detect the object or even its exact distance.

The light of this type of sensor can be a point (point laser) or linearly (line laser). The point type is used to detect distances and the linear type is used to measure the dimensions of objects.

These sensors are divided into different types with digital or analog output with different resolutions and accuracy. Laser sensor can be used in many cases where there is a significant distance between the sensor and the object along with dust or bad environmental conditions.

Browse our wide selection of Laser Sensor products category with the highest quality.

A laser is a device that emits light from very narrow parallel beams that have a certain wavelength. This device consists of light collecting or activating materials that are located inside the light intensifying housing.

This material amplifies the light beam generated by an external energy source (either electricity or light).

What can Laser Sensor Detect?

The working principle of laser sensors

Laser sensor is widely used in industrial and agricultural production, national defense and military, medical and health, scientific research, and other aspects and applications.

These models utilize the visible laser beam, but their detection methods are different.

A laser displacement sensor uses laser technology for accurate and non-contact measurement purposes. It consists of a laser, a laser detector, and a measurement circuit and can be used to measure the position, displacement, and other changes of the target object.

The major types of laser displacement sensors include: reflective, through-beam, and retro-reflective. 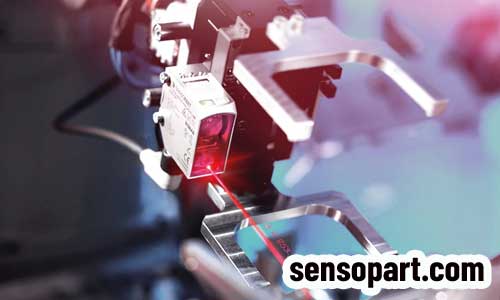 This sensor, also called a transmitter/receiver, contains an emitter to emit laser light and a receiver for the light-receiving task.

In this sensor optical axis create a signal beam between a transmitter made of a laser light emitter part and a receiver made of a light-receiving part.

The sensor recognizes the target objects by recognizing whether the beam of the laser signal emitted from the transmitter is interrupted by the target.

Laser Distance Sensor, which is used to measure distance, uses a narrowed beam of light to measure the distance to the target.

These types of laser sensors are able to detect the distances of any solid object And produce an output signal. The sensor consists of a laser light-emitting, a receiver lens, and a light-receiving (CMOS) located on the head of the sensor.

A laser beam emitted to the surface of a target by the sensor and then receives the reflected light. If there is a change in the position of the received light, the sensor can detect the change in the distance of the target.

This method forms a triangle that consists of the path of the laser beam from the light source to the point of reflection on the surface of the measured target to the light-receiving element. Consequently, it is called the triangulation method.

Features and Advantages of laser sensor

The following articles on our website may be of interest to you: