A rotary encoder is an electromechanical device that is used to convert an angular position or the motion of a shaft or axis into a digital or analog code, used for motion control applications. The output signal can be read by various control systems including PLCs. Control systems using the signal received from the encoder can determine the speed, direction, position, number of pulses, or other items.

The rotary encoder is a type of sensor whose function is to determine the amount of rotation of the shaft and its direction.

The main task of encoders is to take feedback from the environment and convert it into usable data for control systems and processors.

Using tools such as gears and conveyor belts, linear movements can also be controlled by these encoders.

The technologies used in making the encoder are:

Conductive: A circumferential series connected to a PCB will be used to encode the information. Contact brushes sense the contact areas of the conductive zone. This form of the encoder is now rarely used.

Optical: In this technology, light is projected through a slit inside a glass or metal disk toward a light-emitting diode. This technology is one of the most common technologies and this type of encoder is very sensitive to dust.

On-Axis Magnetic: This technology typically uses a magnetized 2-pole neodymium magnet that is the same size as the motor shaft.

The accuracy of this technology is very low and can vary from a few degrees to under 1 degree. Resolutions can be as low as 1 degree or as high as 0.09 degrees and do not give us many resolution options. Due to the use of 2 pole magnets, there is a lot of distortion in the output.

Off-Axis Magnetic: This technology typically uses twisted ferrite magnets in rubber attached to a metal ball, which allows for flexibility in design and low cost for general applications. 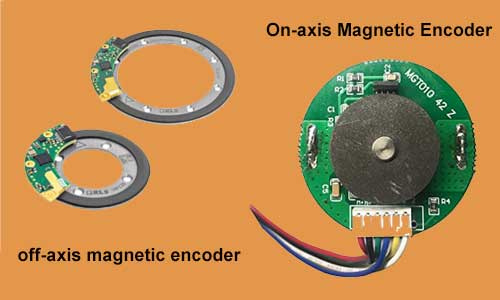 Because of the flexibility of many Off-Axis encoder chips, they can be programmed and designed to accept any number of pole widths, so the chip can be adapted to use in any application. Magnetic encoders can be used in harsh environments where optical encoders are not able to work.

There are different types of rotary encoders that are used for different applications.

Rotary encoders are divided into two main types in terms of function and output:

If the power of the system is lost the incremental encoder will start measuring from 0 when power returns and it reports changes in position but not the absolute position.

The Output of the incremental rotary encoder gives us information about the movement of the shaft, which elsewhere is converted into information such as speed, distance, and position. 360 PPR encoder or Pulses Per Revolution, 1024 PPR encoder, and 1000 PPR are some examples that represent encoder resolution. 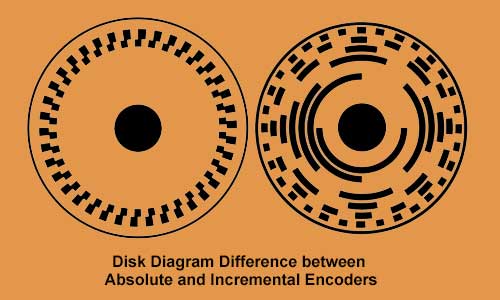 Encoders are divided into two categories in terms of having shafts:

And there are three types of encoders in terms of internal structure and sensing technology:

How does the Rotary Encoder Work?

The components of the rotary encoder are: 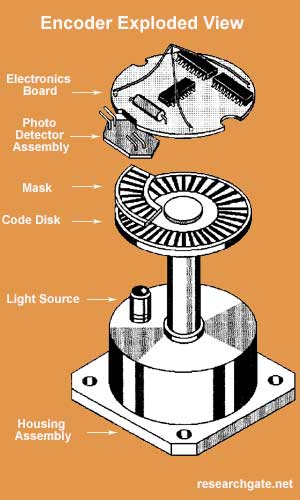 One of the main components of rotary encoders is a glass or plastic disc, which is covered one by one with transparent strips and dark strips.

There are three pins, the disc connected to Common Pin C, Pins A, and B that are connected to the rotating shaft and form a square wave by rotating and connecting to the common pin.

Whenever light hits the sensor, the encoder generates an electrical pulse. When light is reflected by the dark part of the disk and does not reach the sensor, the signal is also cut off.

Pins A and B will start making contact with the common pin and with the continuous rotation of the disk, the two square wave output signals will be created accordingly. The number of pulses is proportional to the angle at which the disk rotates.

There are different rotary encoders that are used across many different industries. Some industries which they can be used within are;

They also can be used in applications that need to monitor or control mechanical systems. Some of the more common applications for rotary encoders that we often are approached for are;