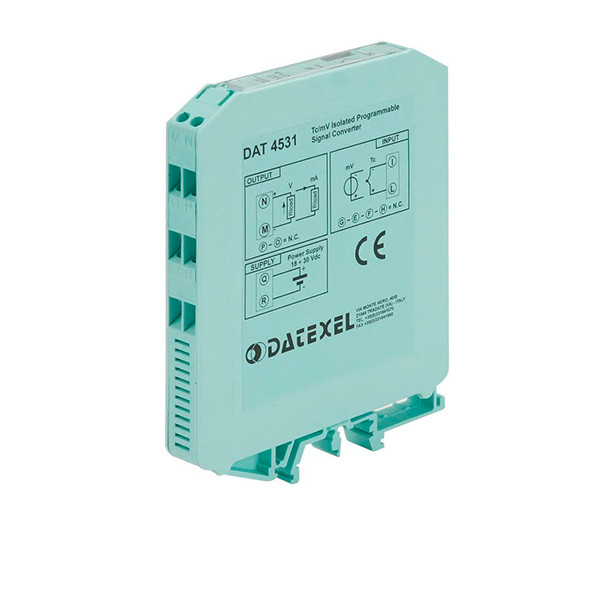 The RTD Temperature converter and Isolated Resistance converter DAT4531B is also a din rail mount Temperature converter. This particular product is programmable by both PC and DIP Switches. The DAT4531B acquires signal from different kinds of RTD's Pt100, Pt1000 Ni100, and Ni1000. It has resistance which goes up to 2000Ohms. This product performs the conversion of this signal and makes the scale linearized. The DAT4531B gives both Voltage and Current output.

Some Features of DAT4531-B are given as under

Some Applications of DAT4531-B are given as under

Products designed by Datexel are made keeping all the standards in mind and all products carry the CE mark, and from March 2015 all Slimline products and DAT3000 modules are supposed to carry the UL and CSA mark. Datexel obtained ISO 9001 in 1996 and now has the current standard UNI EN ISO 9001:2000 (issued in 2001). Datexel's signal conditioners also carry the ATEX 94/9/EC approval for safety environments.

In July 2006, there was the conformation of products to the RoHs Directive Standard (2002/95/EC) which enforces restrictions on the use of unsafe substances for the engineering of electric and electronic equipment.

MSRP:
Now: $256.20
Was:
The Two wire Signal Transmitter DAT4535 is considered as a Universal isolated signal Transmitter which can be both PC and DIP-Switch programmable. The input is made up of many ranges like...

MSRP:
Now: $326.25
Was:
The DAT4530 is a 4 to 20mA Signal Splitter which have the capability of conversion of universal input signal into two analog outputs. The Input which is given can be of different formats like Current...

MSRP:
Now: $230.18
Was:
The thermocouple temperature converter, also mV converter DAT4531A is been considered as a din rail mount converter with internal or external cold junction compensation. This particular product is...

MSRP:
Now: $306.23
Was:
The isolated Signal converter DAT4035 acts as a DIN Rail mount signal transmitter which possess PC programmability. The input which is given can be thermocouples, RTD, mA, V, mV, resistance and...

MSRP:
Now: $330.25
Was:
The isolated Signal converter DAT4135 acts as a DIN Rail mount signal transmitter with PC programmability. The input which is given can be Universal and can be thermocouples, RTD, mA, V, mV,...

MSRP:
Now: $600.46
Was:
The PRODAT USB is a USB programmer which has the ability to program the SMART and Slim range of signal conditioners from DATEXEL. All the DATEXEL Signal Conditioners of the SMART and SLIM have the...

MSRP:
Now: $152.12
Was:
MDR-40-12 is aUniversal AC input/Full range and it has protections of Short circuit / Overload / over voltage. It provides cooling by Cooling by free air convection. This product Can be installed on...

MSRP:
Now: $216.16
Was:
The DATEXEL DAT8050 acts as a LED 4 Digit LED loop powered indicator accepts an input and a power supply from a 4-20 mA current loop signal. In this product, no external power supply is required. The...

MSRP:
Now: $588.45
Was:
The Data Logger DAT9000DLIO acts as a Data Acquisition unit which comes with a built in SD Ram port that can take a Micro SD card. This product also has 4 digital inputs and 2 relay outputs. This...

MSRP:
Now: $288.22
Was:
The DAT 5024AO is a New Process Limit Alarm with Dual Relays. This product offers PC and DIP Switch Programmability and has a universal input and an analog output. The input given could be...

MSRP:
Now: $574.44
Was:
The DAT5030ISBH is an ATEX approved dual channel Zener barrier and is hart compatible and is certified intrinsically safe making it safe for using it in Dangerous area. This product gives isolation...