Timers and Counters are devices that do what their name implies; they can be used to count events or signals external to the system, or they can be used to time activities. A counter/timer is a hardware device that must be initialized or programmed just as other I/O devices. 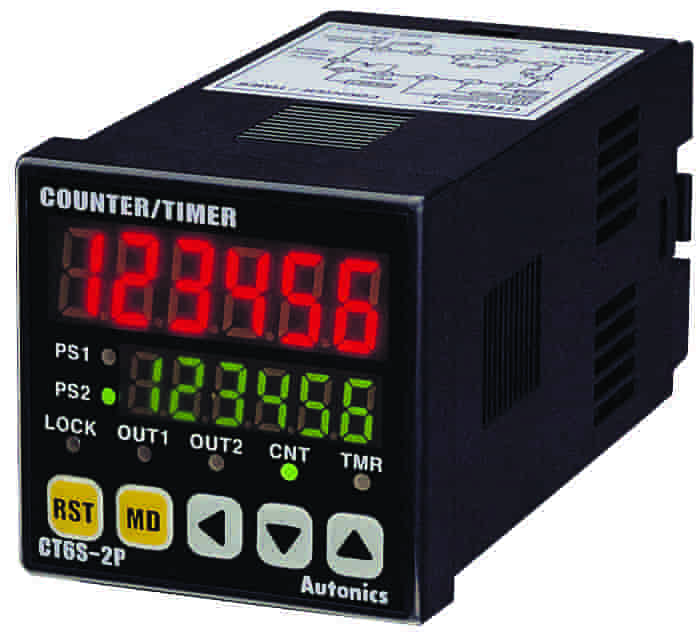 A timer is a device that counts down from a specified time interval and used to generate a time delay, for example, an hourglass is a timer.

A counter is a device that stores (and sometimes displays) the number of times a particular event or process occurred, with respect to a clock signal.

Timer meters, indicators, or totalizers are used in applications for display of elapsed process time or tracking running time of factory machinery.

Interval delay timers are the opposite of delay-on devices in that the relay is energized immediately upon application of the supply or closure of the switch input, and goes off at the end of the period. Interval delay is sometimes called delay pulse.

What is Digital Timers

Digital timers keep track of timing; to trigger an action, to start timing once triggered by an action, or both. Some products are programmable while others may be fixed at a set internal time and function. In addition to the number and type of functions, these devices differ in terms of time range settings.

Digital timers are more compact and also more complex than electro-mechanical timers. If feedback/output control functions are required (in terms of an alarm or another pre-programmed event), a digital timer is a better fit than an electro-mechanical timer. Each digital timer offers digital programmability. Some models have a choice of LED or LCD display. Some also operate as multifunction devices and others with long time ranges. These programmable timer solutions are available in many forms to meet many different needs: time indicators, reset timers, repeat cycle timers and multifunction timers. digital timer models can be more complex yet remain rugged and require minimal maintenance.

The preset time is the control time set by setting a time-variable timer.

The operating time means the time which elapses between the addition of predetermined input to the power supply circuit and input circuit and the completion of operation for preset time.

It means the time which elapses between the completion of operation for preset time and the start of resetting.

It means the time elapses between the start of operation for preset time and the addition of input required again for the power supply circuit or input circuit. Timer does not perform normal function unless this pause time is set longer than the timer reset time.

It means the time elapses between shut-off of input to the power supply circuit or input of reset signal and the completion of resetting.

Timer resetting function shares the reset of contact, reset of mechanical parts such as pointer etc., reset of parts in internal circuits such as capacitor etc., and the value at which all of these parts complete their resetting operation is regarded as reset time. If the timer is used for a pause time shorter than specified reset time, the operation time expires earlier than preset, unexpected instantaneous operation takes place or the operation is failed, thus making it impossible to expect the normal operation. Therefore, be sure to set the timer pause time longer than the specified reset time.

It means the minimum time during which power must be supplied in order to operate the timer normally, in the case of power supply off-delay timer.

It means the irregularity in operating time caused when the timer is set at specified time and the operation is repeated under the same conditions. It is also referred to as repetitive error.

It means the difference between the operating time at the rated voltage and that within the allowable voltage range.

It means the difference between the operating time at the temperature of 20°±2°C and that within the allowable temperature range.

It means the difference between the set time and the time which actually elapses. It is also referred to as a setting error.

Means such a vibration occurs in the range where the contact closed with that vibration during the use of the timer remains closed for the specified time (3 or 1 msec.) minimum.

Means such a vibration occurs in the range where no part is damaged with that vibration during the transportation or use of the timer.

Means such a shock as occurs in the range where the contact closed with that shock during the use of the timer remains closed for the specified time (1 ms) minimum.

Means such a shock occurs in the range where no part is damaged with that shock during the transportation or use of the timer and the operation characteristics are maintained.

Means the durability that is achieved when the control output is performed in the no-load state.

Means the durability that is achieved when the specified voltage and current loads are individually applied to the control output while being turned ON and OFF.

Generally, the life of the timer is represented by the number of times the control output is performed.

When a load is connected to the control output, the term "electrical life" is used.

When no load is connected to the control output, the term "mechanical life" is used.

The electrical life is shorter than the mechanical life, and becomes longer as the load decreases.

The life of the timer is made longer by connecting a relay or a similar part rather than directly switching a large load with the control output.

Means the power that is consumed when the rated operation voltage is applied to the power circuit.

Means the reference value that is used to determine the performance of the switching part of the load.

This value is represented by the combination of voltage and current.

Means the combined resistance that consists of the contact resistance between contacts, and the conductor resistance of pins and contact springs.

Means the limit value that does not cause breakdown when high voltage is applied for one minute to the same location as measured for insulation resistance.

Means the limit value that shows the durability against momentary abnormal voltage resulting from lightning or switching a conductive load.

The surge waveform is represented by the standard impulsive voltage waveform at ±(1.2×50)μs or ±(1×40)μs.

Although there are many different kinds of digital timers, quartz timers are fairly cheap, and so much more accurate than other systems, that they have become the standard. Quartz timers are inside microwaves, computers and many other devices.

At the heart of a digital timer is a very small, and precisely cut, quartz crystal designed to vibrate at a specific frequency. As the crystal repeatedly bends and snaps back up, it sets up an oscillating current--an electric current that increases and decreases in regular waves. Because the quartz crystal is precisely cut, the electronic current oscillates at a predictable speed.

The digital timer circuit counts the pulses of the oscillator, and makes certain actions happen when there have been a certain number of pulses. For example, a timer circuit in a watch would count pulses until a second has passed, then send a signal to display the next second, and restart the count. Another part of the circuit could then count seconds until a minute has passed, and then increment the minute counter. Timers can also send signals to other devices. For example, a timer in a burglar alarm might give someone 20 seconds to deactivate the alarm after a key is inserted in the door lock before triggering the alarm system, and contacting the security company.

Where are digital timers used?

a circuit used in, for example, radar sets, television equipment, and telecommunication systems primarily for the purpose of ensuring that certain processes occur in conformity to certain time relationships.

If you need a timer for your home or office, then you have two main choices. You can go with an analog model or a digital unit with a light-emitting diode, or LED, display. The reality is that digital timers offer better performance and features than what is possible with an analog design. Here are five benefits of using digital LED timers.

A major benefit of using digital LED timers is accuracy. These timers often use quartz crystals in order to generate electrical pulses that are far more precise than inexpensive mechanical devices. The National Institute of Standards and Technology even has guidelines regulating that digital timers need to be accurate down to half of the least significant digit shown on the LED display. This accuracy can make a difference because you will always be able to rely on the timer.

Another advantage of using an LED timer is visibility. The LED face is bright and lit up. This means that you will be able to see the display from across the room, in the dark or from any angle. This is not the case with many analog timers where the numbers are incredibly small. You also always get the exact numerical position in the countdown unlike analog timers where you often have to guess based on the position of a clock hand or arrow between numbers.

Most digital LED timers available today are compact and durable. The amount of space needed for the internal electronics is very small. Some digital timers can be the size of a credit card and not much wider. You can get ones that fit in the palm of your hand. This is not the case with analog timers where many large mechanical components need to be present inside of the unit. Digital timers are less obtrusive, more portable and will last for a longer time.

Setting an analog timer can sometimes be a problem. You usually have to turn a dial or knob of some sort in order to physically move the settings on the device. This can lead to a number of issues especially as the parts wear down. Digital timers have simple and fast controls. You just hit a minute and hour button followed by start when you are ready. This lets you set the timer up fast without having to fumble with dials.

Some Have Multiple Timers

Integrated circuits and electronics allow some digital LED timers to accept multiple programs at the same time. This means that you can actually have two or three separate countdowns going all at the same time on the same device. The ability to set multiple countdowns on a single unit can make doing things like cooking or tracking your daily schedule much easier.