Light curtains are a family of sensors and have many applications in the industry. light curtains also named safety sensors, light screens, and optical guards are devices that make a virtual boundary around risk. They are used to protect valuables objects as well as to prevent access to dangerous and hazardous places in factories.

Light curtains are an advanced method of safeguarding personnel from dangerous machinery during routine operations like maintenance, whereas also giving the operator more freedom and flexibility in an industrial environment.

Dangerous machinery can be defined as any machine or piece of instrument that moves in a way that may cause harm or kill personnel.

How Light Curtain Made and How it Works

Light curtains are composed of a set of sensors or beams arranged in a vertical array with the different spacing configurations that make a curtain.

One of the advantages of light curtains is that they are simple and small compared to mechanical shields. The light curtain as it is a type of photoelectric sensor is made of two parts: a transmitter and a receiver.

They create a barrier of photoelectric cells between the transmitter and the receiver. The transmitter sends a set of synchronized, parallel infrared light beams to a receiver.

If an object passes through the curtain and enters in the sensing field, this presence is detected by the system and causes to trigger the connected device or stop the machinery. 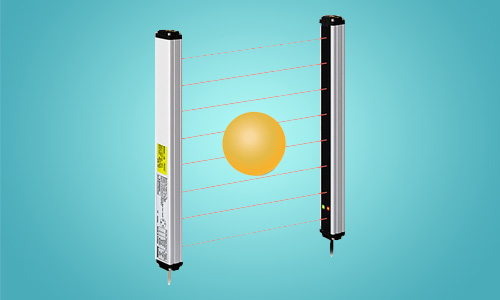 The number of beams, the distance between the beams, and etc. are among the components that play an essential role in determining the type of application of light curtains.

Defines the safety and self-monitoring instructions in the device. Light curtains are mainly available in two types,

Type 4 optical curtains are used to protect people and machines from damage and also to protect cars against damages. In this type of light curtain, the degree of accuracy is high and the control performed is very reliable. also, these curtains have different standards that can be used to design the safety-related parts of the control system.

The resolution of a light curtain is actually the detection of object with the smallest physical size that, if placed in a controlled area, can be detected by the optical curtain and cause the curtain to stop the dangerous movement of the device.

This device can also have different resolutions or beam separations (e.g. 20 mm, 40 mm, 200 mm, etc.). if the resolution of the device is high, the detection capability of it is better for the safety light curtain, so the device can be installed closer to the hazard.

It is the height that is detected and protected by the light curtain and must be chosen based on the access to the hazard.

If the light curtain is placed horizontally, this number will indicate the depth of the protected area.

The maximum operating distance that can exist between sender and receiver.

It is the time for the light curtain to produce an alarm signal after detecting an object or person in the danger zone.

Light Curtain Types Based on Application

Due to the high number of beams and also the short distance of the beams, this type of light curtain is capable of detecting very small objects about the size of a human hand. 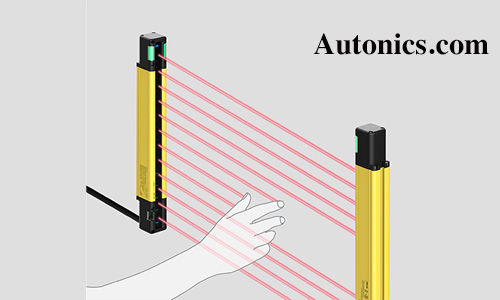 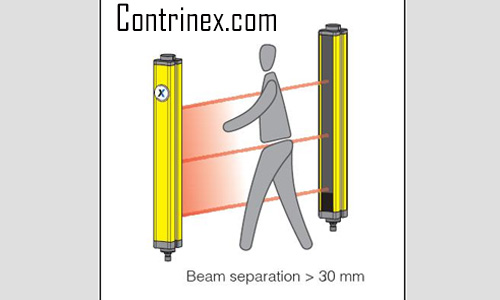 Features and Advantages of light curtains:

Applications of the light curtain

Manufacturers and industrial facilities employ light curtains as a safety mechanism in two general situations: point of operation and perimeter.

Point of operation: For these guards, users install a light curtain at the site of material handling, such as under a hydraulic press, to ensure that no one can enter the danger zone while the machine is operating.

Perimeter: In contrast, perimeter guards refer to outlining a whole working space or room, such as for a robotic arm. These guards can ensure that no person or object enters the boundary of the machine’s movement.