Working with electronic devices means dealing with both analog and digital signals. Here we will discuss Analog Inductive Proximity Sensor. A signal is a wave that contains measurable information about a phenomenon. For example, you can measure power fluctuations, whether the car is on or off, the temperature of the car refrigerator, the amount of fuel in the car tank, and the like.

This information changes over time, which is divided into two categories of analog and digital signals, depending on the type of change. Signals are sent between two devices to send and receive information such as audio, video, etc. Normally, signals are transmitted by wire, but radio waves are also transmitted through the air. Sensors are divided into two categories according to the type of output signal: Digital and Analog proximity sensor.

Another type of inductive sensor is the analog output type. Analog inductive proximity sensor are sensors that detect metallic objects within their working range.

This reaction appears as a line voltage (often 0 … 10 V) or current (4 … 20 mA) at the output or in other words correlates linearly to the distance that the sensor detects. The following curve is an example of the output characteristic of these sensors: 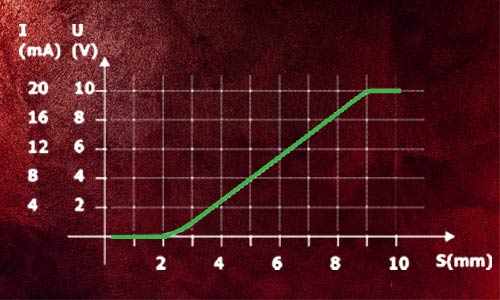 The output of the analog sensor is a continuous voltage or current and its function is based on the distance of the object from the sensor.

These sensors have an analog signal at their output that is proportional to the measured quantity.

Most physical parameters such as temperature, speed, pressure, displacement,… are all analog values.

In these sensors, each measured parameter is attributed to a signal (usually of voltage or current type), which will determine the desired quantity by receiving this signal.

These types of signals change continuously over time, or in other words, they will never change suddenly and range from a few microvolts (μV) to several millivolts (mV).

So due to the continuous nature of analog signals, analog sensors have a high degree of accuracy and reliability.

The proximity sensor with analog output have an oscillator circuit made of a parallel resonance circuit with a coil, a capacitor, and an amplifier.

Also, they are useful where longer linear ranges are needed.

Some applications for the analog inductive sensors include:

Please refer to other proximity sensor articles for more information: