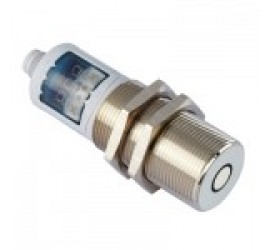 Ultrasonic transducers are transducers  that convert ultrasound waves to electrical sounds or vice versa. Those that both transmit and receive may also be called ultrasound transceivers; many ultrasound sensors besides being sensors are indeed transceivers because they can both sense and transmit. These devices work on a principle similar to that of transducers used in radar and sonar systems, which evaluate attributes of a target by interpreting the echoes from radio or sound waves, respectively. Active ultrasonic sensors generate high-frequency sound waves and evaluate the echo which is received back by the sensor, measuring the time interval between sending the signal and receiving the echo to determine the distance to an object. Passive ultrasonic sensors are basically microphones that detect ultrasonic noise that is present under certain conditions, convert it to an electrical signal, and report it to a computer.