inductive sensors are a type of sensor which detect the movement, position, presence, or absence of objects without any physical contact, standard type doesn't support the condition that need protection against high temperature, high pressure, weld immunity or space limitation.

Non physical sensing causes factors such as friction and mechanical erosion do not affect their lifespan and can work well in harsh environments where there is soil, oil, grease, etc.

These sensors only react to metallic objects. They are basically based on magnetic circuits, hence they are also called electromagnetic sensors.

Each standard standard inductive sensor consists of the following parts, which are fixed and necessary in all sensors: 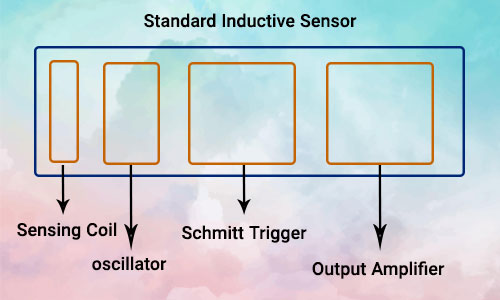 How Does a Inductive Sensor Work?

Standard inductive proximity sensors use currents induced by magnetic fields to detect nearby metal objects. The sensor uses a coil (inductor) to generate a high-frequency magnetic field. The oscillator produces a magnetic field that radiates from the ferrite core and the coil.

The field is centered around the axis of the ferrite core so that it can be directed to the front of the sensor.

The ferrite core and the coil induce a high-frequency magnetic field in the sensor, which the oscillator is responsible for producing.

This field often accumulates around the ferrite core so that it can be more easily transmitted to the front of the sensor.

When a metal object comes close to the sensing range of the sensor, these directed magnetic fields flow to the metal object and are received by it.

As a result, the amplitude of the waves generated by the oscillator decreases, and this amplitude change in frequency is reflected by the trigger circuit that is a Schmitt trigger.

The circuit will start operating when it reaches a certain level of amplitude change, at the same time the sensor output section will be activated. The output can be an electric current.

Now, if this metal object moves out of the magnetic field of the sensor and away from it, the amplitude of the oscillator frequency will increase, in contrast to the state that is near to the metal body, and after reaching a certain value, the sensor output will stop working.

Sensors with AC voltage supply are usually between 90 and 240 volts, depending on the brand and manufacturer, and the advantages of these sensors include the following:

Direct operation of the sensor and no need for AC to DC converter for the sensor.

Standard inductive sensors with DC voltage supply are usually designed and manufactured between 5 to 35 volts. In these sensors, it is very important and necessary to consider the connection of the positive and negative wires and they are proper to connect to all types of PLCs and counters.

In Flush-style sensors or shielded proximity sensor there is a metal shield or cover that operates in a way that reduces lateral radiation from the electromagnetic field and they radiate out of the face of the sensor.

These types of sensors can be installed flush in a metal bracket or even in your machine without the metal causing the sensor to false trigger.

This style of the sensor cannot be mounted flush in a metal bracket, as the metal will cause the sensor to actuate.

2-wire sensors: This model of sensors has two connecting wires. The load is connected in series with the sensor in the circuit.

3-wire sensors: In this type of standard inductive sensor, there are three wires, which two wires are used to connect the sensor to the power supply, which according to the European standard (50044 EN) brown for positive and color Blue is for negative. The third wire, which is black, is the output of the sensor. 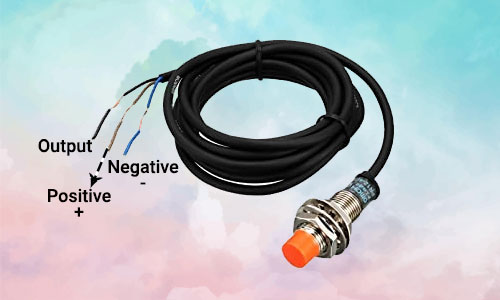 In the less common PNP transistor, current flows from the emitter to the base and the transistor turns on. As a result, the two sensors are different in the way that in the NPN standard inductive sensor, the output is 1 when the metal object is not close to the sensor. And by detecting the metal in its sensing range, the output is 0, and this performance is reversed in the standard inductive sensor with a PNP transistor.

There are many different ways for mounting standard inductive sensors. To prevent unwanted interference from the measuring field and to achieve the maximum measuring distances, the installation instructions must be followed and the specified distances must be maintained.

If the minimum distances are reduced, a decrease in sensor distance is expected. Sensor testing directly in the app is recommended. there are 2 methods of mounting for standard inductive sensors. Flush mounting, or embeddable mounting and un-flush mounting.

Flush mounting, also known as embeddable mounting, is exactly what the name describes. The sensor is flush with the mounting surface. The advantage of mounting the sensor in this way is that it provides protection to the face of the sensor. A non-flush inductive proximity sensor is relatively easy to spot because it extends out from the mounting bracket and also uses a cap that surrounds the sensor face.

Non-flush sensors offer the longest sensing distance range because the electromagnetic field extends from the sides of the sensor face as opposed to the edges or strictly the front of the face.

There are special types of standard inductive sensors known as Namur sensors. These sensors are used in areas where there is a risk of explosion due to the limitation in their current and voltage. For this reason, the Namur sensor is also called the explosion-proof sensor.

The detection range of standard inductive sensors depends on the type of sensor and whether it is shielded or not. Also, the maximum distance that the sensor can detect a metal body depends on the material of the metal body.

Standard inductive sensors have advantages that have made them more widely used in some industries, including:

Standard inductive sensors, in addition to the advantages mentioned above, also have disadvantages, which include:

The sensitivity range of an standard inductive sensor depends on the type of metal detected, the shape as well as the size of the coil used in the design of the building of these sensors.

As a result, standard inductive sensors do not have the ability to adjust the detection range.

Standard inductive sensors are only suitable for metal objects, so the use of these sensors is limited to metal parts.

Applications of standard inductive sensors in industry and everyday life: