Temperature refers to intensive quantity and it is the way of determining the energy state of particles within an object. All materials are made of particles - atoms or molecules that are in constant motion, vibrating, or rotating. Because the particles of the object are moving, they have kinetic energy. So the temperature is defined as a measure of the average kinetic energy of its atoms and molecules.

This kinetic energy is a type of energy related to motion. The faster the particles are in motion, the more energy they have.

Therefore, the more kinetic energy the particles of an object have, the temperature of the object is higher.

We should use a more specific way to indicate temperature because the terms hot and cold are not very accurate or scientific.

There are several different scales and units that have been developed during the recent centuries and used in different parts of the world.

But there is a very specific limitation for the low end of temperature which is the absolute zero temperature, the lowest possible temperature that possibly cannot ever be achieved.

Temperature is measured with different units. The three most common temperature units used today are the Fahrenheit, Celsius, and Kelvin units. 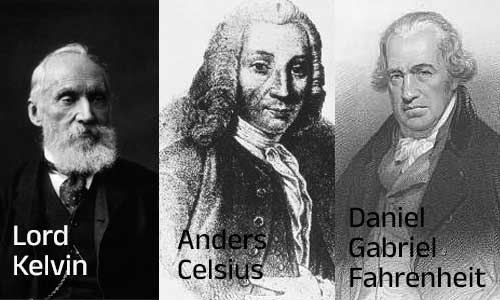 Kelvin is the standard international unit (SI unit) for temperature which is indicated by the symbol K. The Kelvin unit is most commonly accepted or used in the field of science and engineering.

It is the lowest temperature that theoretically can be achieved and at which the particles of an object would become motionless. The water freezing and boiling points on this unit are 273.15 K and 373.15 K, respectively.

Because of its direct relation to absolute zero, It is extensively used in industry and scientific work.

These points are the two main reference points of the Celsius unit. One Celsius degree has the same size as in the kelvin unit.

The Celsius unit is The most common and better-suited form of measuring temperature in day-to-day situations and is presented by the symbol °C.

The differentiation between the Celsius and centigrade units can be confusing. These two terms are common synonyms of one another and are used interchangeably.

Celsius and centigrade are two different terms for basically a similar temperature unit and use the same degree designation. but there is a difference between these terms.

In 1742 the scientific community decided to standardize the temperature scale. They defined the Celsius unit.

After that Centigrade was created by French scientist Jean Pierre Cristin used the same divisions as Celsius's unit but set the freezing point at 0 degrees and the boiling point at 100 degrees. It is named the centigrade unit, because it was divided into 100 parts, with centi as the prefix for 100.

Therefore the centigrade/Celsius unit was officially assigned the Celsius unit.

You may also want to browse our selection of temperature sensor with great prices on this link.

Celsius, Fahrenheit, and Kelvin are the three common temperature units. Each of these units has its uses, so there is the possibility for the need to convert them. The relationship between these three temperature units is given in the table below 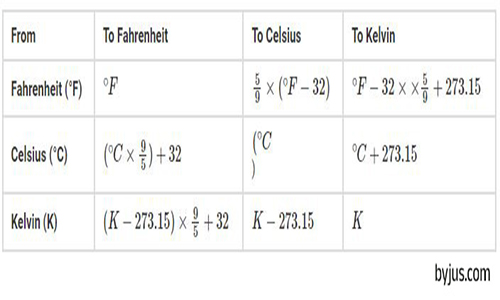 For Example, If The room temperature is defined to be 25 ºC:

1.To convert from Celsius to Fahrenheit,

2.To convert from Celsius to Kelvin,

There are Some other common temperature units named Rankine, Newton, Rømer, Réaumur, and Delisle. These units are listed in the table below. 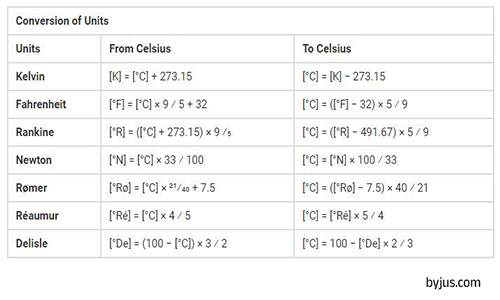 Unit, such as Kelvin, with a zero point that is absolute zero

It is defined as the temperature at which the average kinetic energy of molecules is zero.

Temperature unit in which 0 K is the lowest possible temperature that indicates absolute zero.

Tap here to get more information about temperature sensor:

How to Choose a Temperature Sensor?