What Are Capacitive Proximity Sensors?

A very simple definition of Capacitive Proximity Sensors can be defined in the following words:

Capacitive proximity sensors are termed as the non-contact devices that can detect the presence or absence of any kind of object regardless of the material’s nature.

Capacitive sensors make use of the capacitance’s electrical properties and the change of capacitance, which depends on the change in the electrical field around the active face of the sensor.

The capacitive proximity sensors can detect both metallic and nonmetallic targets, and their ideal usage is for liquid level control and for sensing granulated materials.

A capacitive proximity sensor is made up of high-frequency oscillators, and they come with the sensing surface, which is formed by two metal electrodes.

Whenever an object gets close to the surface, this object comes into the electrodes’ electrostatic field and results in the oscillator’s capacitance changes.

The oscillator circuits begin to oscillate and change the sensor’s output state when it goes to a certain amplitude in the aftermath. As the object moves away from the sensor, the oscillator’s amplitude decreases, which causes the sensor to get back to its initial state. 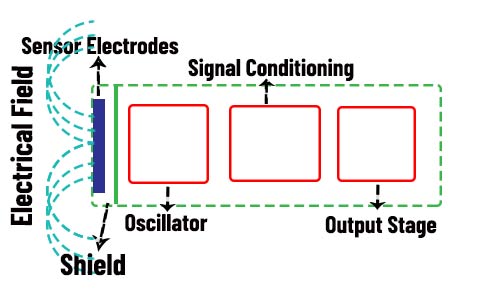 Capacitive proximity sensors usually have short ranges, and usually, they have the sensing range of about 1 inch, and it doesn't depend on the type of material being sensed.

To make the maximum benefit of these sensors, there is a need to use them in an environment with relatively constant temperature and humidity.

They have high resolution and high resistance to the temperatures of 200 degrees centigrade. Capacitive sensors are also used to measure the distance at low temperatures as a reference system for other distance sensors.

One of the other typical applications of the capacitive sensors is:

Some of the Application Of Capacitive Proximity Sensors are given in detail below.

Capacitive sensors are used for the measurement of the brake disc. Talking about the brake disc’s vehicles as they are exposed to short term loans is usually high.

The Mechanical rubbing and extreme temperature development on the break lead to a very negative impact on the brake disc’s microstructure.

The material used in the brake disc must possess the ability to suppress this load for a long period without having any change in the microstructure.

If there are fine cracks, this will lead to a break when the load is applied and put the persons inside and the vehicle in danger. Capacitive sensors have their usage in the measurement of the brake disc deformation. Very few sensors are adequate for operating close to the object measured as very high-temperature development is involved.

The capacitive sensors have the ability for the detection of changes in the nanometer range and also the measure the wear on the brake disc.

Capacitive Proximity Sensors In Measurement At Turbines Or Engines

Talking about the Turbines, the centrifugal force present on the turbine blades leads to the blades’ extension and the turbine’s design and construction.

No kind of imbalance must arise-blades’ extension, which gains the ability to imbalance the system. The capacitive sensors can detect changes in the nanometer range, and then they make sure the provision of the crucial data for the FEM analysis.

However, through the use of projective capacitance, we can increase the touchscreen accuracy as it results in the formation of a triangulated grid which is present around the point of touch,

The mutual capacitive sensors make sure to provide a two-dimensional image of the changes occurring in the electric field.

Through this image, a wide variety of applications have been proposed, like the users’ authentication, estimation of the orientation of fingers touching the screen, and differentiations between the palms and fingers.

To view capacitive sensors in our stock, please check out the capacitive proximity sensor.