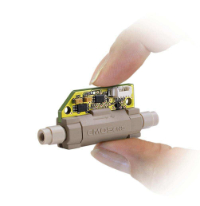 Liquid flow sensors, sometimes also referred to as mass flow meters, are devices designed to measure the flow rate of a liquid that passes a predetermined point in a pipe or other transmission medium. Flow sensors come with many different capabilities depending on the application. Some are able to measure extremely small flow rates of 40 micro-liters per minute or about the size of one rain drop of water. There are dozens of different methods used for how liquid flow sensors function within flow meters. Differential pressure flow meters place an obstruction in a pipe, and the drop in pressure it creates as liquid flows around it is applied to the Bernoulli equation for conservation of energy in fluid dynamics to calculate the flow rate. An orifice plate water flow sensor also uses an obstructing plate in the pipe, and compares the up-speed pressure of the liquid's flow to its downstream pressure where the fluid is constricted by the plate. Orifice plate liquid flow sensors are cheaper than differential pressure meters and can be used to measure a wide variety of types of fluid flow. Venturi tube liquid flow sensors are used where pressure drops are lower and more difficult for orifice plate sensors to measure. They operate by an actual reduction in the diameter of the pipe and calculate differential flow based on that. Flow nozzles are another design related to Venturi tube sensors, which are more commonly used to measure gas or other air flow in a pipe. Rotameters and velocity flow meters operate by directly measuring the passage of fluid in one form or another. With a rotameter, a float in the tube rises based on upward pressure and buoyancy versus the downward pull of gravity, and the height of the float is used to calculate the flow rate. A velocity flow meter measures the speed of fluid flow at several points in the pipe and calculates an overall average. Several other common types of liquid flow sensors exist. Calorimetric flow meters employ two closely spaced temperature sensors in contact with the fluid, but insulated from each other. One sensor is heated, and the temperature drop on the other sensor can be used to determine how fast the liquid is flowing. Mechanical liquid flow sensors, such as turbine flow meters and vortex flow meters, are also common. Turbines measure flow based on rotating vanes on the unit, and vortex models create low pressure eddies in the current that is compared to regular liquid flow rate. Positive displacement flow meters also use rotating vanes like turbines, but the precision fitted rotors are instead installed at multiple points, and the volume of liquid that passes between them during certain intervals of time is recorded by counting the rotations of the vanes. Sophisticated liquid flow sensors also exist that don't require direct measurement of the liquid at all. A few of these include electromagnetic flow meters that measure the electromagnetic induction effect. As a liquid conductor like water moves through a pipe, magnetic coils on the outside of it produce a voltage that is directly proportional to the flow rate of the liquid. Ultrasonic and doppler flow meters calculate flow rate indirectly as well, by measuring changes in sound frequencies that are affected by both the velocity and direction of fluid flow.